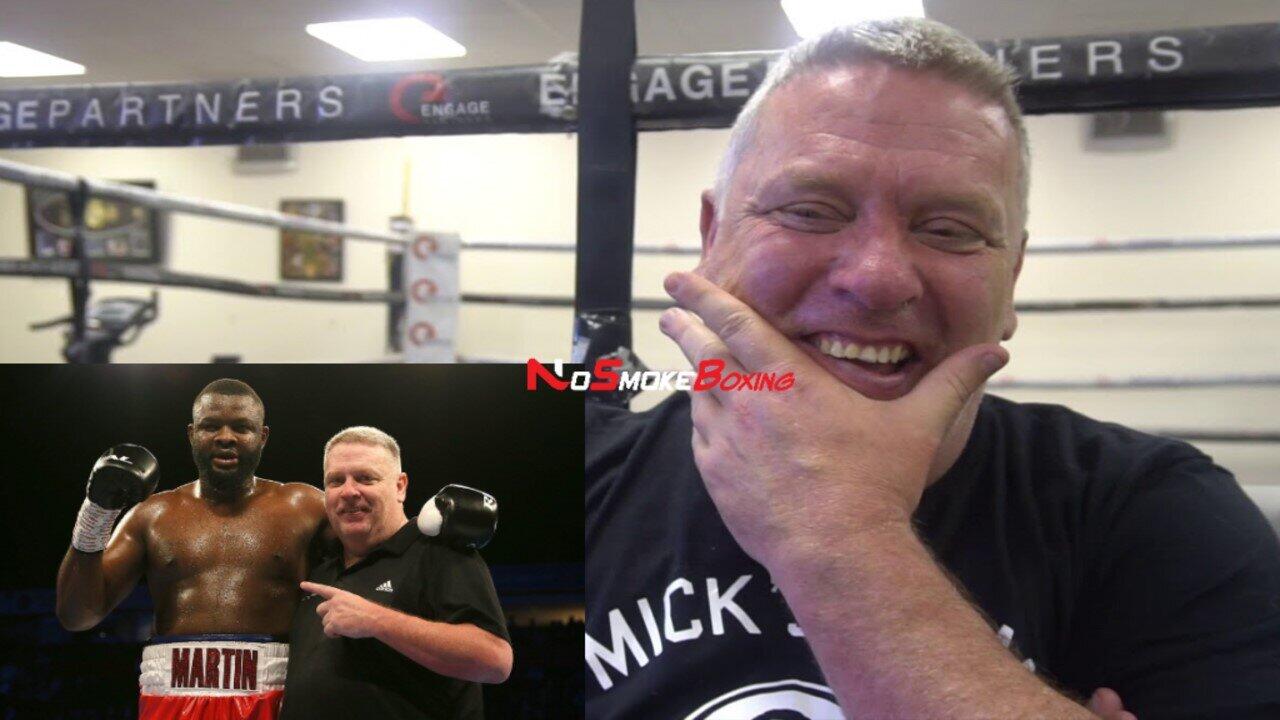 Billy Nelson discusses the in-depth experience he has as a trainer and working with the highly touted heavyweight, Martin Bakole. Billy Nelson is a highly decorated Scottish trainer and manager, who took Ricky Burns to two world titles and is currently guiding the career of heavyweight contender, Martin Bakole. The latter dominates the agenda for our interview with Billy.

He reveals that Bakole is applying for sponsors to get a visa to come back to the UK, as there is an issue between the Boxing Board of Control and the Home Office. Nelson also revealed that Bakole is no longer working with Eddie Hearn and won’t feature in the upcoming fight camp series.

While Eddie secured Martin Bakole a top fight with Sergey Kuzmin, you would hope Bakole would still be able to secure big bouts under an alternate arrangement. MTK Global and Nelson are working behind the scenes to make the next fight for Bakole and you would hope news on an opponent will arrive soon.

Nelson thinks the win over Kuzmin deserves credit because Kuzmin knocked down Joe Joyce in the amateurs. As for the nature of his next contest, Nelson says he should be in an “8 to 10 rounder” as he has only fought once in 18 months and needs to “shed the ring rust”.

Nelson cites the reason for Bakole’s inactivity as being let down by other people, but regardless of finger-pointing, the harsh reality is inactivity is a fighter’s worst enemy and Bakole needs to have more fights to make sure he doesn’t suffer a setback.

On the wider heavyweight landscape, Nelson believes Wilder looked “childish” by putting headphones in and refusing to answer questions and says he “should have been the bigger man”.

He thinks Bakole would stop Joyce in the mid to late rounds and doesn’t think Joyce is personally ducking the fight but instead, believes his management “don’t want to let him near them”. He believes that Demsey McKean is now in line for the final eliminator with Hrgovic and argues “they have the two worse resumes” ever for a world title eliminator. Nelson believes Bakole has “never got the rub of the green and he’ll have to do it the hard way”.

Such obstacles include being overlooked for the Joyce fight. The heavyweight will instead take on Carlos Takam, who Nelson takes a dim view of saying “he’s a 40-year-old” and whenever he steps up, “he doesn’t rise to the occasion”.

He also believes that “Dubois would 100% be knocked out by Bakole.” and in a quicker fashion than Joe Joyce. He says Bakole is “comfortably the best fighter I’ve ever trained” and can “punch like a fucking horse”. The current improvements he is working on with Bakole are his ring generalship and his ability to control the distance.

Nelson explains that the reason for Bakole’s one knockout defeat to Michael Hunter was because “his head was fried” as a result of bad news from back home in Congo on the Thursday night of the fight week.

He says Bakole had quality sparring with Anthony Joshua and Hughie Fury in the build-up to the fight, and Peter Fury phoned him to say “he couldn’t believe the performance he put in”. In cross-comparisons to Hughie, Nelson highlights that Bakole got the knockout that evaded Hughie.

He boldly declares that critics should “forget the Hunter fight” and are in for a “rude awakening” if they judge him solely on that defeat. While family reasons may have been a mitigating factor for his defeat to Hunter, he is in illustrious company as his brother is WBC cruiserweight champion, Ilunga Makabu.

Nelson says his brother “showed [Bakole] the ropes and every day he battered him to toughen him up.” Nelson believes Martin Bakole will be the A-side “one day” but is not a ticket seller yet. He claims Bakole has “psychologically destroyed” fighters in sparring, which is why no one wants to fight him.

As for Ricky Burns, he says “you couldn’t fault him in the gym” and it was “excellent” making him a two-weight world champion. He admits that southpaws caused him the biggest trouble in his career including Terence Crawford.

He believes Josh Taylor has already taken “the mantles of the headline figure of Scottish boxing” over from Burns. He says Taylor is “improving all the time and is approaching his prime”. Moving focus to slightly south of Edinburgh and Lewis Ritson, who Nelson used to train.

Nelson explains that Ritson struggles with his weight and his punch output was not at its usual standard. Ritson’s father threw in the towel and the referee controversially disregarded it. Nelson says “no one knows Lewis better than his father” but the decision as to whether a fight should be halted, ultimately lies with the referee’s discretion. He thinks Lewis can go on to win a European title still.

He says Ritson has “something you can’t teach” and he had to leave his tutelage because his girlfriend was pregnant and homesick. An understandable life choice but still a decision that was “gutting” for Nelson.