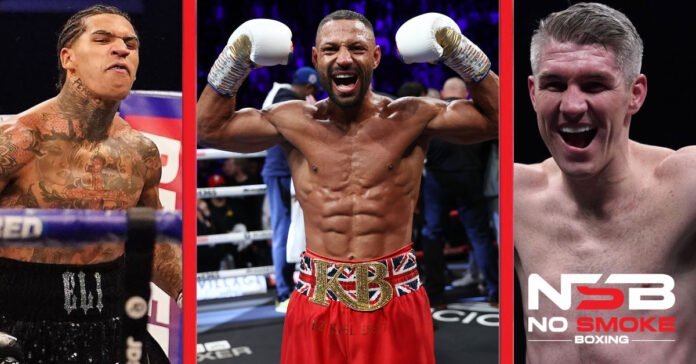 Liam Smith sensationally stopped Chris Eubank Jr in the 4th round on Saturday night at a sold-out AO Arena in Manchester live on Sky Sports Box Office and DAZN.

Although Eubank has a rematch clause and Smith confirmed that he would accept a rematch if Eubank wanted it, the Liverpudlian also called out retired Sheffield boxer Kell Brook (40-3, 28 KOs), who BOXXER’s CEO Ben Shalom claimed would be interested in facing the Eubank-Smith winner.

Brook’s trainer Dominic Ingle revealed to Boxing King Media in an exclusive interview that he doesn’t see the need for Brook to make a return. “I personally don’t think he (Kell Brook) should box again, he doesn’t need to box again.”

Ingle also believes that if Brook were to fight again, a clash with Liam Smith is certainly not the fight that would be enticing enough to lure Brook out of retirement.

“I wouldn’t be interested in that fight (Liam Smith). It’s not really a fight Kell needs to have. It’s not interesting enough for Kell. It wouldn’t be a fight that I’d want to train Kell for at all.”

Ingle instead stated that in conversations with Brook, the Sheffield boxer had informed him of his desire to face Welterweight star, Conor Benn.

“When I’ve had talks with Kell, he said ‘the fights which really interest me are Conor Benn’. He’s Nigel Benn’s lad, he’s got this big name of being a big puncher. They sparred together…it was quite a good spar. I remember Kell saying to me ‘he’s got something about him’.”

Ingle confirms that Benn is a more interesting fight for Brook than Smith is and that if he were going to come out of retirement, it’s much more likely to be for Benn, should he be cleared.