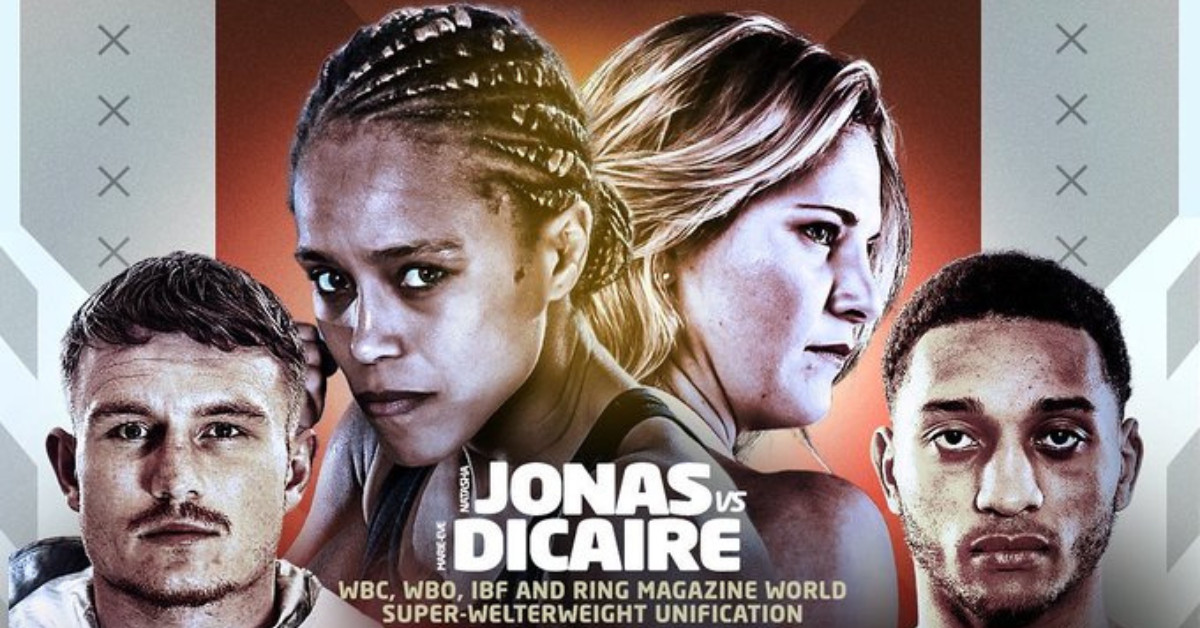 The unified world WBC, WBO, IBF and Ring Magazine super-welterweight titles will all be on the line at the AO Arena in Manchester, England when Natasha ‘Miss GB’ Jonas faces defending Marie-Eve Dicaire.

Jonas (12-2-1, 8 KOs) conquered Patricia Berghult for the WBC belt earlier this month in her home city of Liverpool. The coveted green strap joined her pink WBO belt in her trophy cabinet – and now the former Olympian wants to add Dicaire’s IBF belt and Ring Magazine titles to her collection and write herself another glorious chapter in boxing’s history books.

Her quest for global domination takes Jonas into a clash with Canada’s two-time world champion Dicaire (18-1-0, 1 KO) in what promises to be a momentous world championship encounter with all three titles on the line.

Coming just weeks after a historic night of celebration for women’s boxing takes place on October 15th at The O2 in London – when Savannah Marshall faces Claressa Shields for the undisputed middleweight world titles – the contest further highlights the strength of the women’s sport in what has been a gala year for female boxing.

Southpaw Dicaire suffered her only professional defeat to date to Shields back in March 2021 following a unanimous decision. But she reclaimed her then vacant IBF title when she produced a stunning stoppage win over Cynthia Lozano last December in Montreal.

The main event between Jonas and Diclaire in Manchester tops the bill in what promises to be an unmissable BOXXER bill screened live and exclusively in the UK and Republic of Ireland on Sky Sports Boxing.

BOXXER earned the right to promote the mandated British championship bout between the two rivals when it won the purse bid earlier this month.

Former Team GB sensation Smith scored an impressive sixth-round stoppage win when he headlined in Sheffield last month – his third consecutive win inside the distance – to win the vacant title and take his number of professional stoppage wins to ten, including a 2021 TKO of BOXXER Series tournament semi-finalist Lee Appleyard.

Benjamin, from Birmingham, has 16 wins from 17 professional appearances and is undefeated in his last 13 fights. In June, he celebrated a unanimous decision win over Serge Ambomo at the Coventry Skydome to maintain his status as Smith’s mandatory opponent.

And Frazer ‘Big Fraze’ Clarke (3-0, 3 KO’s) will bid to continue his impressive and rapid rise up the heavyweight rankings as he takes on his toughest professional challenge to date in the form of experienced veteran Kamil Sokolowski (11-26-3, 4 KOs).

Clarke has won all three of his professional bouts thus far with three devastating knockouts – and the Tokyo 2020 Team GB Olympic bronze medalist will be hungry to add another stoppage to his burgeoning highlight reel in front of a packed crowd at the AO Arena – just a stone’s throw away from the home of his beloved football club, Manchester United.

Earlier in the evening, Manchester’s own Bradley ‘The Sting’ Rea (14-0, 6 KO’s) will put his unbeaten record on the line when he takes on English middleweight champion Tyler Denny (14-2-3). Rea has developed a reputation for an all-action style and will look to make this another crowd-pleasing contest for his hometown fans.

BOXXER CEO & Founder Ben Shalom, said: “This will be a massive night of boxing in Manchester.

“Tasha Jonas can etch her name in the history books by winning the WBC, WBO, IBF and Ring Magazine titles if she beats Marie-Eve Dicaire. I think this is Tash’s toughest test to date and it promises to be a spectacular women’s fight, just weeks after the iconic all-female card in London, on 15th October.

“In the co-main, Dalton Smith will be hoping to win the British super-lightweight title outright in what is a very, very tough challenge against Kaisee Benjamin. It’s a big fight and it will have huge consequences for the winner.

“Dalton is one of the finest young fighters in the country. We saw recently in Sheffield how his popularity continues to grow. Kaisee is a brilliant talent too and he’ll be hungry to pull off a major upset

“Frazer Clarke will go right to the top of this very exciting heavyweight division. He has a huge personality and the talent and commitment to go all the way. This fight against Kamil Sokolowski will offer a sterner test against experienced competition that fans will look forward to seeing

“Bradley Rea against Tyler Denny is a great fight. I saw Tyler in one of the fights of the year when he won the English title against River Wilson-Bent. This will be a huge test for Brad early on in his career. It is a compelling fight and possibly it could be the  fight of the night. Brad has the chance to make a real statement in front of his home crowd on the big stage.”

“This truly is a great card, taking place in the iconic big fight city of Manchester, and it will be a night which promises to be a historic occasion with Tasha fighting for the unified world titles, just weeks after our iconic evening of women’s boxing at The O2 in London.

“And we’ll have a real spectacle in store with Kaisee Benjamin challenging Dalton Smith for the British title. Both men are hot prospects, who have huge futures ahead of them. This fight has all the makings of a domestic classic.

“Plus, after the controversy of his last outing in Liverpool, I’m delighted to see Frazer Clarke stepping it up against Kamil Sokolowski. A big man for a big night of boxing, live on Sky Sports – including the legendary Ricky ‘The Hitman’ Hatton versus Mexican great Marco Antonio Barrera, which takes place in an unmissable separate show by Europa Combat on the same evening, following the BOXXER card.” 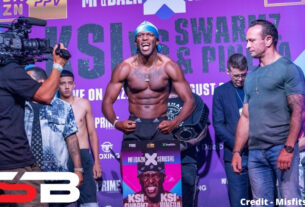 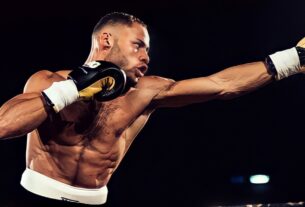 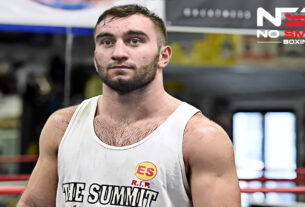 Murat Gassiev Returns, Here Is Who He Is Fighting And How Can You Watch It

1 thought on “NATASHA JONAS AND DALTON SMITH TOP THE BILL IN BLOCKBUSTER BOXXER: MANCHESTER EVENT ON SATURDAY, 12th NOVEMBER AT THE AO ARENA”